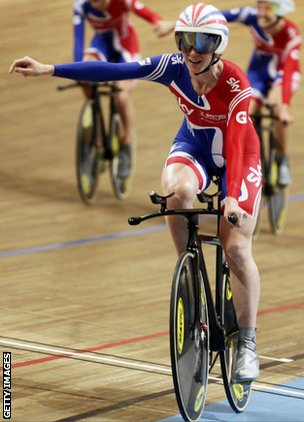 Wendy Houvenghal to race in London 2012 qualifier in Belfast

Olympic silver medallist Wendy Houvenaghel will compete in a London 2012 time trial qualifying event in Northern Ireland in May.

The 22-mile event on 13 May will start at the Stormont Estate in Belfast and take in Newtownards, Bangor, Holywood and Tillyburn.

The race will be one of only four Olympic qualifiers in the time trial event for the London Games.

Incorporated into the Celtic Chrono event will be a charity leisure cycle.

Over 1,000 participants are expected to take part in the charity event which will raise money for Action Cancer, the NSPCC, Diabetes UK and Aware Defeat Depression.

The event will be the first time that an Olympic time trial qualifier has ever been staged on the island of Ireland.

Northern Ireland woman Houvenaghel's Olympic event will be the team pursuit where she will be hoping to help Great Britain land gold in London.

The 37-year-old, who won silver in the 3000m pursuit in Beijing, raced at last month's World Cup at London's Olympic Velodrome.

The team won gold but Houvenaghel was left out of the trio that competed in the final after losing their heat.

She played down her omission from the final after Great Britain were beaten by Canada in the heats before taking revenge in the event climax.

"Because all four of us need to experience racing on the track every one of us had the opportunity to ride," said the county Londonderry woman.

"I was given the task of performing the qualification heats and then Dani [King] had the opportunity to ride in the final heat," she said.